The narrow, sometimes steep streets wind through the old city centre. The houses, built with pink red gypsum, wood and sandstone, tower high above them. The ironworks before the windows are conspicuous.

Albarracín numbers three houses of noble families from former times. Both their interior and their exterior are abundantly decorated. These houses are: the palace that belonged to Monterde de Antillón family, at the left-hand side in the street that runs from the Plaza Mayor to the cathedral, the palace of the Dolz de Espejo family (nowadays called the hotel Albarracín) and the adjacent house of the Navarro de Arzuriaga family (La Casa Azul – The Blue House) 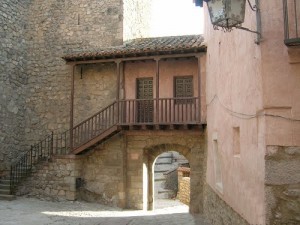 The city wall and the entrance gates
The city wall has been a national monument since 1931. The biggest part dates from the 14th century and was resored in the 80s of the 20th century. The oldest parts, amongst which the highest tower, la torre del Andador, date back to the 10th century. A visit to the wall is most rewarding: once on top of the wall you have a magnificent view over Albarracín.
In the late Middle Ages, Albarracín had three main entrance gates. The Portal del Agua and the Portal de Molina are still in perfect state. However, nothing has been preserved of the Portal de Teruel, originally located near the current hotel Albarracín. 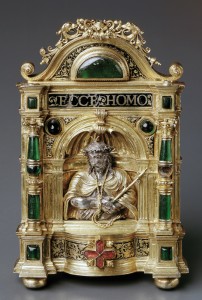 The diocesane museum is has its seat in the 18th century episcopal palace. Remarkable pieces from the collection are the 16th century Brussels tapestries, a gold pax tablet, attributed to Benvenuto Cellini, a decorated parish cross, several chalices and a fish, carved out of rock crystal.

Originally the Doña Blanca tower, next to the Santa María church, was a fortress that protected the southern part of the city. The legend of Doña Blanca of Aragón is based on this tower where this princess spent her days in banishment. According to the legend she still shows herself every summer during full moon when she descends to the river to bath. The tower was restored recently and is used nowadays as exposition space. The rooftop offers a beautiful view over Albarracín.
Together with the Santa María church the Doña Blanca tower is the only part remaining of the Dominican monastery. Originally, the cementery also formed part of this complex.

Santiago church
This church can be found in the midst of the old city centre. The construction started in 1600 under guidance of the architect Alonso del Barrio Dajo and was finished in 1626. The church has got only one nave under a star-shaped ribbed vault and chapels in the niches between the buttresses.  The main altar was made by Pedro Castillejo. The consecrated altarpiece from 1524 is dedicated to San Roque, San Sebastián and San Fabián. It was painted on planks by Jerónimo Martínez. Another ancient altarpiece that can be seen is from la Dolorosa. This piece is from Molina de Aragón, a city with close ties to Albarracín.
Tradition has it that the house opposite the church the home of the knights of the Order of Albarracín.

The Santo Cristo de la Vega Chapel is next to the Dominican monastery. In 1559 already the Dominicans took care of this sanctuary.  In 1632 the construction of the current chapel was started. In 1703 the chaspel of Christ was built on on the kopse xx side. A fire burnt the crucifix in 1872. It was replaced by the current figure of Christ. This statue is one of the works of art with the highest artistic value of the whole Sierra de Albarracín. 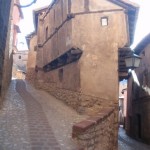 This house, from the 14th century is near the Portal de Molina. With its capricious forms this house is the most illustrative example of Albarracín´s popular architecture. After being restored
by the Fundación Santa María de Albarracín in the early 21st century, it is now used as a studio. 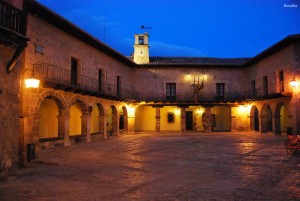 The town hall is located at the Plaza Mayor. It was built in the 14th century. Its current appearance dates from the 16th century, when it was renovated.

The late gothic cathedral was built in the 16th century on the foundations of an older church from the 12th Century. The cathedral has got only one nave and, in between the buttresses, several chapels.  Two altarpieces in particular are striking: in the main chapel the one by Cosme Damián Bas from the 16th century (one of the most important pieces from the Aragonese Renaaissance) and the one of Saint Pete. At the end of the 18th century the interior of the cathedral was restored. Baroque elements, like the pilasters, were added. 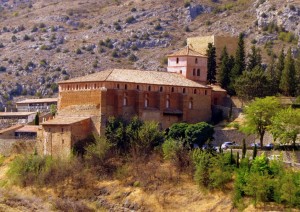 This church was built before 1200 and therefore was the oldest church of medieval Christian Albarracín. The main architect was the Frenchman Quinto Pierres Videl who was not able to finish it the project. Probably a local architect took over the work. He added several mudéjar elements in the higher parts of the outer walls. Nowadays, the cathedral forms the setting for classical concerts.

The castle is built on top of a steep rock, high above the Guadalaviar River.
A document from 1581 shows that at the time the castle had three entrance gates, only one of which still exists. The wall counts eleven round towers and one square tower that was built during the Christian period. The castle, that can be visited, covers an area of about 3,400 m2.

In 1608, Antonio Sánchez Moscardón was granted permission to build the monastery of San Bruno and San Esteban of the Order of the Dominicans of Albarracín. The work was finisghed in 1621.

This 18th century chapel can be found in the neighbourhood “El Arrabal”.